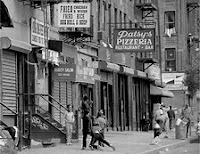 The chef, Alfonso, sweating armpits,  listening to the Brooklyn Dodgers' radio broadcast, betting on Jackie Robinsin to hit a homer in the bottom of the ninth to win a reprieve from paying  the pennantand busy while, as an owner of a pizzeria in Cobble Hill, about the old Brooklyn Dodgers, suddenly the bay window glasses shattered, leaving a baseball in a minestrone soup that spattered the Deaf Godfather's fedora, prompting him to take out a silencer from his holster, in anger ordering his bodyguard to bring in that kid left behind after his friends split the scene holding the stick, fearing it that will be taken away and be used as a rod, whipping his bare butt, and worse facing the embarrassment of exposing his Superman undies. The Deaf Godfather (signing) asked the young Deaf hoodlum, a Lexington pupil, to give him a reason why he shouldn't face the consequences of his action. The young Deaf hoodlum, with quick thinking, quoted a verse from Galatians.
"Brothers, if someone is caught in a sin, you who are spiritual should restore him gently. But watch yourself, or you also may be tempted."
Source: Galatians 6:1 (NIV)
The Deaf Godfather, with a conscience, decided to spare the rod, paid the owners for the damages, and adopted the young Deaf hoodlum from the orphanage, keeping him off the streets, and turning away from life of crime. It's that one quote lead a family to faith.
Posted by Gary A. Fitts at 09:38