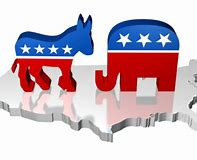 The presidential election is already over. It's possible one can win the popular vote, and yet still lose the election. We don't directly elect our President, instead we choose delegate who will casts the votes in an electoral college, but I just want to point out in this blog an interesting tidbit that in six states, including Massachusetts, where all of its delegates goes to the candidate that won the national popular vote, regardless how its residents vote. Just think of it, if everyone in your state vote for a Republican candidate, all of its delegates goes to a Democratic candidate because he has the most votes nationwide. It doesn't make any sense, but that's politics.

This is Smokey stay tuned for the next episode of Deaf Anthology, Good Night Deaf America!
Posted by Gary A. Fitts at 22:17