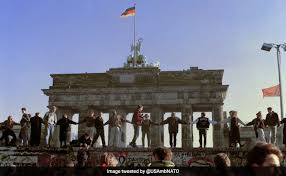 A press conference, an unintentional answer to a question, suddenly change the world, where the Berlin Wall collapses overnight, Checkpoint Charlie watches the Germans celebrate their newfound freedoms. I'll like to hear the testimonies of those Deaf who crosses the border thirty years ago today. This is probably the only instance where the divided Deaf community united as one. Actually the KGB plans to send in the tanks, but Gorbachev refuses to allow that, letting history unfold itself. Putin was in Dresden at that time, knew it was the beginning of the fall of the Soviet Union, now as its President, trying to reverse course, restore its glory past. A statue of Reagan was was send to Berlin, but the city has no vacant spot to erect the statue so now it stands on the roof of our embassy.