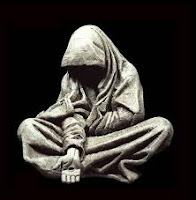 Las Vegas police arrested a homeless man after receiving several complaints of impersonated a "deaf" beggar, actually he's a laid off VRS interpreter, struggling with alcoholism. During questioning, he admitted that his Deaf parents overstayed their visas and left him behind, after being deported back to Honduras . ICE agents took him to the detention center, awaiting a hearing before an immigration judge to consider his asylum request, but will nevertheless be denied due to his lengthy rap sheet.
Posted by Gary A. Fitts at 11:33