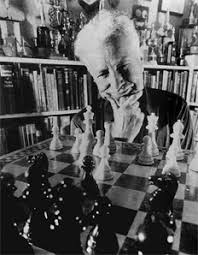 Blizzards sometimes prevents our Deaf children from going home on weekends, creating hazardous road conditions, disrupting rail schedules, etc. When the temperatures are way below zero, so had to keep the boys indoors, teaching them new games such as chess. I read that a chess grandmaster is coming to Brookfield Square to play against 25 players simultaneous, anyone who beats him wins a free chess set. It's a great opportunity so I asked Larry if he'll accept the challenge and tag along Marty. It was awesome watching both Larry and Marty at that table facing one of the world's greatest  chess grandmasters, an experience of a lifetime. The grandmaster says "good game," shaking their hands after the game.
My late Deaf brother, Buster, a linotypist with the New York Times, taught me how to play chess when I was a kid. He always play chess during breaks at work, studying books of chess stratagies, building antique chess tables in his workshop. I once had him play, set on the grandmaster level, chess on an Atari game console, and was surprised that a even computer couldn't beat him.
Larry burst into tears when I met him again fifteen years later at a bar during the Deaf bowling tournament in Milwaukee. He wasn't drunk, he was just crying while telling me those days were the happiest years of his childhood when he was in my dorm, thanking me for teaching him chess and everything else. I was taken aback, he taught me something at that moment, that Larry wasn't just a troublemaker after all but a great kid.
I would like to see Deaf schools established chess teams and send them to the annual Junior National Chess Championships hosted by the U.S. Chess Federation. I also challenge any Deaf schools to start a fundraising drive, seeking donations from local business and organizations, to send a team to play against Russian Deaf schools. I once visited a Deaf school in St. Petersburg (formerly Leningrad) where all the Deaf boys in the dorms are playing chess. One nine years old Deaf Russian boy, Denis, whom I play chess with later became my son and came to America.
Arpad E. Elo, a native of Hungary and a professor of psychics at Marquette University,  devised the system that ranks the world's chess players, and a founder of the United States Chess Federation. Yes, he faced the young Bobby Fisher back in 1957. I think Gary Kasparov of Russia, a former world champion, whose rating of at least 2790 is the highest ever, unless I'm behind the news. Elo also set up chess programs for children in the Milwaukee area, Marty and Larry probably the only Deaf to play against the late world champion grandmaster Arpad E. Elo
Posted by Gary A. Fitts at 17:52