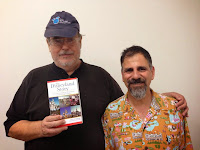 I met author, Sam Gennaway, who wrote the book, "The Disneyland Story" I thought it was an interesting  lecture, with PowerPoint, learning a few things that happened behind the scene such as when making a $10,000 deposit on a plot of land, but the city heard it was Disney behind the deal and demanded a higher price, but Disney withdrawn from it and bought land in Anaheim instead. Same situation here in Florida, thought about putting the Magic Kingdom up in West Palm Beach, but Central Florida was a more suitable location. Disney bought land secretly until the Orlando Sentinel broke the story, and the rest is history.
Posted by Gary A. Fitts at 21:16