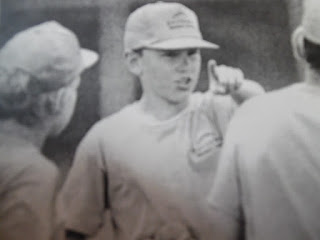 An element of baseball strategy- like a batter watching a third-base coach relay signs- is an everyday way of life for the hearing-impaired.
Larry and Vicky Feinstein wanted to make the sport of baseball a little easier for those children who will never hear "Take Me Out to the Ballgame" during the seventh-inning stretch or listen to an umpire scream, "Play Ball!"
The Greenfield residents held a fantasy baseball camp  for 14 children last week- four of which were hearing-impaired- at Dan Jansen Park.  The husband and wife found out about such a camp through the Sertoma of Milwaukee, which been serving those with disabilities since 1921.
"I think it went really well for the first year," said Vicky, the camp director. "It does hit home because we normally take our hearing for granted. I think that the kids that can't hear know the fundamentals of baseball."
Added husband Larry,  "They're no different from any other kid. I think they pretty much knew what to do."
The campers ranged from 7 to 12 years of age.
"It's a good turnout because we got a better chance to be one-on-one with the kids," Vicky said. "We hope for more kids but we've to got to start somewhere."
Larry was pleased with  the camp's debut.
"I guess from our own personal standpoint, we did what many people thought was impossible, that it couldn't be done," Larry said. "We were kind of shooting from the hip most of the time, but it was a great experience. The kids got to have fun."
The children learned the fundamentals of fielding, running, batting, catching, and being an actual teams, and also got a shirt, hat, daily refreshments, snacks and a lunch.
The camp is based in St Charles,  Mo., where it is in its seventh year.The camp is supported by Big Rivers Chapel, local businesses and several former St. Louis Cardinals, including Stan Musial,Bob Gibson, and spokesperson Ozzie Smith.
Larry and Vicky heard about this, and went to a Sertoma meeting in Chicago to finalized their plans. They hold the camp, so they send letters to schools, passed out flyers, and asked local businesses to donate equipment, food and volunteers.
The City of Greenfield allowed the Feinsteins use of the field, and equipment was donated by the YMCA.
"Just the smiles on their faces, I thought it made it all worthwhile," Larry said. "Some of the young kids, it upped their self-confidence. They had never play baseball.
"I think when you look at it, there's no difference between them. Their skills are as good as the kids that can hear. In fact, the hearing-impaired were the best baseball players we had out there."
Such a scenario would make any third-base coach smile.
Source: Greenfield Observer (Wisconsin)
Note: My son, Denis, participated in the baseball came, he later join a Little League team.